The Mudd Club Show plays all types of music, we like to find connections rather than differences.

The Mudd Club musical format, one could say its mission, is to create a dialogue between songs. This dialogue uses songs as words, that build sentences, and complete whole musical paragraphs. These constructs will tell a story about how music, no matter what the genre or time in history when it was recorded, are connected. They have similar melodies, rhythms, themes, messages, and influences. The Mudd Club does not shy away from abrasive atonal sounds, nor from melodic sweet productions. It’s the juxtaposition of these sounds that creates the most compelling story for the audience.

While in film school, Ivan started to DJ at the Mudd Club in NYC. Soon after that he became a producer and remixer for recording artists such as; Bow Wow Wow, Book of Love, Depeche Mode, Devo, Dominatrix, Echo & the Bunnymen, Gene Loves Jezebel, The Jesus & Mary Chain, King Missile, Les Rita Mitsouko, Lords of Acid, New Order, XTC, and others. His productions are featured in motion pictures including; “Silence of the Lambs”, “Grosse Point Blank”, “American Pyscho”, and “Planes, Trains & Automobiles”. Ivan went on to provide music supervision for PBS, MTV, and VH1. He was the music supervisor for Jon Stewart and the Daily Show at Comedy Central. Ivan spent the last 10 years working for NBCUniversal at 30 Rock pioneering their digital & social media marketing strategies. He currently splits his time between Vancouver WA and Brooklyn NY. Do not ask him to choose between the two.

We fight boredom and repetition, in the past 74 shows we have not repeated one song. That is over 1,100 songs without a duplication. 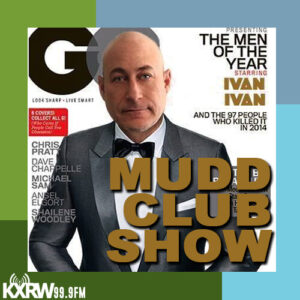 My daughter was having a party and we just needed to find cool music. We scanned the dial and found KXRW, I was so happy at what I found I emailed the station and offered to help in anyway. I really liked everyone I met. I explained my vision of how a radio show should promote new independent artists while paying homage to their influences. I also told them how I was a DJ at the original Mudd Club in New York City and this was my musical style even back then. The team at KXRW totally understood where I was coming from and that is how the Mudd Club Show came into being.