The Show for Everybody… But Not Everybody Will Like It.

What is Fusebox you ask? Well, Fusebox is a podcast. But not about pods… or casts. Although casts are interesting because you can write and draw on them… except you wouldn’t want a cast because that would mean you broke something which, you know, would really suck.

So yeah, Fusebox is a podcast about stuff other than casts or pods even though our studio is like a pod… sort of. Or not.

Wait, what was the question again?

Accomplished musician, amature mixologist, and ferret-wrangler are a few of the many talents Marc brings to Fusebox. A native of the West Coast,
fate and good timing brought Marc to the Pacific Northwest where he owns and operates the award-winning audio design studio Fuse. He won an Emmy™ award for music, sound design, and character
voice on NBC’s “Shamu TV”. But just don’t ever ask him about chem-trails… or
Florida.

Other Host... sort of

Originally from Utah (Yeah, we couldn’t believe it either), Milt started his career as a DJ for a number of long-defunct radio stations across the country… which isn’t a coincidence as Milt likes to point out. His true calling came as a Program Director, but his real passion is as a Board-Operator. Once got stoned and ‘got busy’ with a certain blonde actress… while driving… through Utah… before being pulled over and arrested.

Fusebox 213 – “Heard It Through The Grapevine”
Fusebox 213: “Heard It Thru The Grapevine” — Not much longer will MAGA thrive! But until that glorious day, enjoy this slice of post-xmas Fusebox audio goodness — ...
Read More
Fusebox 210 – Dread Reckoning
Fusebox 210: “Dread Reckoning” — Look, it’s really simple: Ya let some group of chuckleheads take away the basic human rights of one group, ya risk ‘em taking away the rights of another group… a group YOU might be part of. And that’s exactly why we vote, folks ...
Read More
Fusebox 209: “Under Obstruction”
Fusebox 209: “Under Obstruction” — What do ya get when Americans don’t exercise their right to vote? You get a smoking crater where your country used to be. So, if you like the freedoms we enjoy here in the United States of Awesome, get’cher ass out and VOTE! ...
Read More
Fusebox 197 “Codswallop”
Fusebox 197: “Codswallop” :: Once upon a time, there lived a beautiful podcast called Fusebox. It was a funny, insightful, clever, and entertaining podcast enjoyed and tolerated by tens of dozens of a couple of people across the land.THE END — ...
Read More
Fusebox 196 “Conspiranoimia”
Fusebox 196: “Conspiranoimia”—Sure, it’s what’s on the inside that counts. But if ya cut MTG open, you’d be slathered and awash in batcrap crazy mixed with eye-gouging tastebud-blistering icepick-in-the-ears ugliness to match her outsides! ...
Read More
Fusebox – 195 “Is It In?”
Fusebox 195: “Is It In?”—Find out if Marc Rose and Milt Kanes were able to get Fusebox’s “Studio 51” out of a technological black hole and up and running bigger, better, n’ badder than before. And remember: When something doesn’t fit, get a bigger hammer! ...
Read More
Fusebox 194 Wire Side Chat
Host Marc Rose details the process of rewiring the Fusebox studio and the calamities therein. Also, a look at the "Sunshine Protection Act" and a few award winning WTF Florida's ...
Read More
Fusebox – Spiders of Destiny – 6/1/22
A conversation loaded with Frank Zappa Easter eggs. There might be a fly in the ointment though ...
Read More
Fusebox – Twisted Epiphanies Part 2 – 5/04/22
In this second part of our two part program, we explore a bit further into the "mind's ear" ...
Read More
Fusebox – 05 – Twisted Epiphanies Part 1 – 4/06/22
On this episode we explore the "minds ear" as we delve deep into spoken word performances ...
Read More

Irreverent without being malicious.

These are just two of the ways we’ve described our show to folks. With witty banter, deft writing, interesting interviews with a wide variety of fascinating guests, and cleverly crafted comedic bits, Fusebox really is The Show for Everybody… But Not Everybody Will like it. But, heck, try us out! Push Play! Drop the needle! Listen and smell for yourself! Besides, it’s only 30 minutes out of your life to give us a listen!
What, you got better things to do? 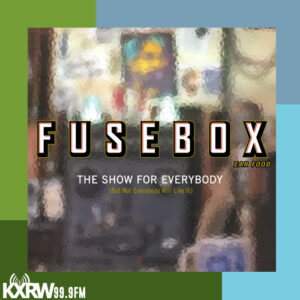 Once upon a time, 2015 to be exact, there was a sound designer and voice actor named Marc Rose who was having something of a mid-life crisis which evolved into this really stupid idea to do a podcast (clearly, the guy needs a date). Anyway, he went ahead and did it by, somehow, bribing this other dude named Milt Kanes with promises of riches and possibly “donuts” (more on that later), so Milt decided to come on board because, heck, how long could Fusebox last? Three shows maybe? Eleven minutes?

So they did their first show and yet another loser, er… I mean friend, actor, and graphic designer named Jeff Pollard heard the show and offered to brand Fusebox by creating a crispy masthead, spanky tagline, and cooler-than-the other-side-of-the-pillow cover art. Anyway, this Jeff dude also starting writing for the show and creating regular bits and sketches n’ skits and characters and crap like that so that all of Marc, Milt, and Jeff’s loser, er… actor friends could come and play too. And play they did!

Soon, these three idiots discovered they had listeners in England and Ireland and Australia and South Africa and even Russia among other places! The next piece of the puzzle was the addition of Regina Carol to handle the social media crap (and hopefully keep Milt somewhat in line) since neither Marc, Milt, or Jeff really excel or even understand social media… I mean, what the holy heck is “InstaFace” anyway? So this “eleven minute” foray into the podcasting world has turned into an 8 years-200 hundred shows-and-counting odyssey that has left family and friends
scratching their heads.